Diposting oleh Agung Prasetyo Oktober 04, 2015 Posting Komentar
Children has their own ways and stages in learning language. Some researcher tried to explain the stages. The stages and process below is normal children who has ordinary brain and speech organ to produce sound and acquire language. 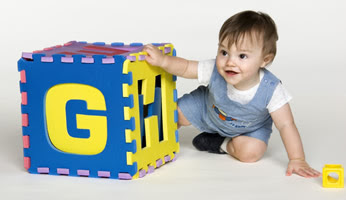 Babling: in this stages we can indicate that children has normal organ while they able to do babling stage such as called their mother, ma ma, pa pa
Intonation: A baby imitate intonation pattern from their parent and environment.

2. One word and telegraphic

Can use active and passive sentences

This theory tried to combine innative and behaviorism theory

There are some factor affecting language disorder and delay. It divided into two main factors Neural and Physical factors

Neural : is language disorder or delay related to damage or up normal of brain. It affecting children in process the language and produce language. Usually child with this problem late to speak.

Psychical factor : The problem on each part of human body to produce language like speech organ (mouth, teeth, nose, tongue, lips) and other like ear to hear sound, eye to see the letters and so on.

Environment : Child who can communicate to direction need

Childhood bilingualism like immigrant, children speak at home and school with different language. But they still be able to speak it all

Speed of children and adult in learning

Solution for who are scare to speak. It need mental, it is one of main factors of speak target language. It need self confident, self interest, necessary, and comfortable.