A Brief History of Language Teaching

Diposting oleh Agung Sejuta Januari 23, 2017 Posting Komentar
This chapter, in briefly reviewing the history of language teaching methods, provides a background for discussion of contemporary methods and suggests the issues we will refer to in analyzing these methods. From this historical perspective we are also able to see that the concerns that have prompted modern method innovations were similar to those that have always been at the center of discussions on how to teach foreign languages. Changes in language reaching methods throughout history have reflected recognition of changes in the kind of proficiency learners need, such as a move toward oral proficiency rather than reading comprehension as the goal of language study; they have also reflected changes in theories of the nature of language and of language learning. Kelly ( 1969) and Howatt (1984) have demonstrated that many current issues in language teaching are not particularly new. Today's controversies reflect contemporary responses to questions that have been asked often throughout the history of language teaching. 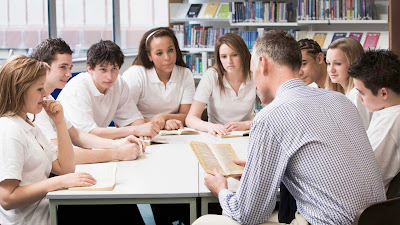 As "modern" languages began to enter the curriculum of European schools in the eighteenth century, they were taught using the same basic procedures that were used for teaching Latin. Textbooks consisted of statements of abstract grammar rul es, lists of vocabulary, and sentences for translation. Speaking the foreign language was not the goal, and oral practice was limited to students reading aloud the sentences they had translated. These sentences were constructed to illustrate the grammatical system of the language and consequently bore no relation to the language of real communication.

By the nineteenth century, this approach based on the study of Latin had become the standard way to studying foreign language in schools. A typical textbook in the mid-nineteenth century thus consisted of chapters and lessons organized around grammar point. Each grammar point was listed rules on its use were explained, and it was illustrated by sample sentences.

Nineteenth-century textbook compilers were mainly determined to codify the foreign language into frozen rules of morphology and syntax to be explained and eventually memorized. Oral work was reduced to an absolute minimum while a handful of written exercises, constructed at random came as a sort ' of appendix to the rules.

This approach to foreign language teaching became known as the Grammar- Translation Method.

As the names of some of its leading exponents suggest (Johann Seidenstiicker, Karl Plotz, H. S. Ollendorf, and Johann Meidinger), Grammar Translation was the offspring of German scholarship, the object of which, according to one of its less charitable critics, was "to know everything about something rather than the thing itself" (W. H. D. Rouse, quoted in Kelly 1969: 53). Grammar Translation was in fact first known in the United States as the Prussian Method. (A book by B. Sears, an American classics teacher, published in 1845 was enti tled The Ciceronian or the
I'russian Method of Teaching the Elements of the Latin Language [Kelly 1969J.) The principal characteristics of the Grammar-Translation Method were these:

Grammar Translation dominated European and foreign language teaching from the 1840s to the 1940s, and in modified form it continues to be widely used in some parts of the world today. At its best, as Howatt (1984) points out, it was not necessarily the horror th at its critics depicted it as. Its worst excesses were introduced by those who wanted to demonstrate that the study of French or German was no less rigorous than the study of classical languages. This resulted in the type of Grammar Translation courses remembered with distaste by thousands of school learners, for whom foreign language learning meant a tedious experience of memorizing endless lists of unusable grammar rules and vocabulary and attempting to produce perfect translations of stilted or literary prose. Although the Grammar-Translation Method often crea tes frustration for students, it makes few demands on teachers.

Toward the mid-nineteenth century several factors contributed to a questioning and rejection of the Grammar-Translation Method. Increased opportunities for communication among Europeans created a demand for oral proficiency in foreign languages. Initially this created a market for conversation books and phrase books intended for private study, but language teaching specialists also turned their attention to the way modern languages were being taught in secondary schools. Increasingly the public education system was seen to be failing in its responsibilities. In Germany, England, France, and other parts of Europe, new approaches to language teaching were developed by individual language teaching specialists, each with a specific method for reforming the teaching of modern languages.

The Frenchman C. Marcel (1793-1896) referred to child language learning as a model for language teaching, emphasized the importance of meaning in learning, proposed that reading be taught before other skill s, and tried to locate language teaching within a broader educational framework. The Englishman T. Prendergast (1806-1886) was one of I he first to record the observation that children use contextual and situational cues to interpret utterances and that they use memorized phrases and "routines" in speaking. He proposed the first "structural syllabus," advocating that learners be taught the most basic structural pattern occurring in the language.

Language teaching specialists like Marcel, Prendergast, and Gouin had done much to promote alternative approaches to language teaching, but their ideas failed to receive widespread support or attention. From the 1880s, however, practically minded linguists like Henry Sweet in England, Wilhelm Vietor in Germany, and Paul Passy in France began to provide the intellectual leadership needed to give reformist ideas greater credibility and acceptance. The discipline of linguistics was revitalized. One of the earliest goals of the association was to improve the teaching of modern languages. It advocated

Linguists too became interested in the controversies that emerged about the best way to teach foreign languages, and ideas were fiercely discussed and defended in books, articles, and pamphlets. Henry Sweet (1845-1912) argued that sound methodological principles should be based on scientific analysis of language and a study of psychology. In his book The Practical Study of Languages (1899) he set forth principles for the development of teaching method. These included

In Germany the prominent scholar Wilhelm Vietor (1850-1918) used linguistic theory to justify his views on language teaching. He argued that training in phonetics would enable teachers to pronounce the language accurately. Speech patterns, rather than grammar, were the fundamental elements of language. In 1882 he published his views in an influential pamphlet, Language Teaching Must Start Afresh, in which he strongly criticized the inadequacies of Grammar Translation and stressed the value of training teachers in the new science of phonetics. In general the reformers believed that:

These natural language learning principles provided the foundation for what came to be known as the Direct Method, which refers to the most widely kwon of the natural methods. Enthusiastic supporters of the Direct Method introduced it in France and Germany (it was officially approved in both countries at the turn of the century), and it became widely known in the United State through its use by Sauveur and Maximilian Berlitz in successful commercial language schools. (Berlitz, in fact, never used the term; he referred to the method used in his schools as the Berlitz Method.) In practice it stood following principles and procedures:

Particular methods differ in the way they address these issues. But in order to understand the fundamental nature of methods in language teaching, it is necessary to conceive the notion of method more systematically. This is the aim of the next chapter, in which we present a model for the description, analysis, and comparison of methods. This model will be used as a framework for our subsequent discussions and analyses of particular language teaching methods and philosophies.

Read: The Importance of Including Culture in EFL Teaching