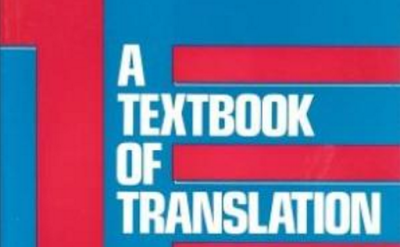 This is often demonstrated as interlinear translation, with The TL immediately below the SL words. The SL word-order is preserved and the words translated singly by their most common meanings, out of context. Cultural words are translated literally. The main use of word-for-word translation is either to understand the mechanics of the source language or construe a difficult text as a pre-t ran slat ion process.

The SL grammatical constructions are converted to their nearest TL equivalents but the lexical words are again translated singly, out of context. As a pre-translation process, this indicates the problems to be solved.

A faithful Translation attempts to reproduce the precise contextual meaning of the original within the constraints of the TL grammatical structures. It 'transfers' cultural words and preserves the degree of grammatical and lexical 'abnormality' (deviation from SL norms) in the translation. It attempts to be completely faithful to the intentions and the text-realisation of the SL writer.

Semantic translation differs from 'faithful translation' only in as far as it must take more account of the aesthetic value (that is, the beautiful and natural sounds of the SL text, compromising on 'meaning' where appropriate so that no assonance, word-play or repetition jars in the finished version. Further, it may translate less important cultural words by culturally neutral third or functional terms but not by cultural equivalents - une nonne repassant un corporal may become 'a nun ironing a corporal cloth' - and it may make other small concessions to the readership. The distinction between 'faithful' and 'semantic' translation is that the first is uncompromising and dogmatic, while the second is more flexible, admits the creative exception to 100% fidelity and allows for the translator's intuitive empathy with the original.

This is the 'freest' form of translation. It is used mainly for plays (comedies and poetry; the themes, characters, plots are usually preserved, the SL culture converted to the TL culture and the text rewritten. The deplorable practice of having a play or poem literally translated and then rewritten by an established dramatist or poet has produced many poor adaptations, but other adaptations have 'rescued' period plays.

Idiomatic translation reproduces the 'message' of the original but tends to distort nuances of meaning by preferring colloquialisms and idioms where these do not exist in the original- (Authorities as diverse as Seteskovitch and Stuart Gilbert tend to this form of lively, 'natural' translation.)

Communicative translation attempts to render the exact contextual meaning of the original in such a way that both content and language are readily acceptable and comprehensible to the readership.

B. Comments In These Methods

It has sometimes been said that the overriding purpose of any translation should be to achieve 'equivalent effect, i.e. to produce the same effect i'or one as close as possible on the readership of the translation as Has obtained on the readership of the original. This is also called the 'equivalent response' principle. Nida calls it "dynamic equivalence”. As I see it, 'equivalent effect is the desirable result, rather than the aim of any translation, bearing in mind that it is an unlikely result in two cases: (a) if the purpose of the SL text is to affect and the TL translation is to inform (or vice versa); (b) if there is a pronounced cultural gap between the SL and the TL text.

Considering the application of the two translation methods semantic and communicative to the three text-categories, suggest that commonly vocative and informative texts are translated too literally, and expressive texts not literally enough. On the other hand, the inaccuracy of translated literature has much longer roots: the attempt to see translation as an exercise in style, to get the 'flavorful or the 'spirit' of the original: rhe refusal ro Translate by any TL word that looks the least bit like the SL word, or even by the SL word's core meaning fl am talking mainly of adjectives), so that the translation becomes a sequence of synonyms ''grammatical shifts, and one-word to two- or three-word translations are usually avoided), which distorts its essence.

In expressive texts, the unit of translation is likely to be small, since words rather than sentences contain the finest nuances of meaning; further, there are likely to be fewer stock language units colloquialisms, stock metaphors and collocations, etc. Uhan in other texts. However, any type and length of cliche must be translated by its TL counterpart, however badly it reflects on the writer.

Note that I group informative and vocative texts together as suitable (or communicative translation. However, further distinctions can be made. Unless informative texts are badly/ inaccurately written, they are translated more closely than vocative texts. The translation of vocative texts immediately involves translation in the problem of the second person, the social factor which varies in its grammatical and lexical reflection from one language to another.

Where communicative translation of advertisements works so admirably, producing equivalent pragmatic effect, there seems no need to have recourse to * co-writing', where two writers are given a number of basic facts about one product and instructed to write the most persuasive possible advert in their respective languages. I should mention that I have been describing methods of translation as products rather than processes, i.e, as they appear in the finished translation.

As for the process of translation, it is often dangerous to translate more than a sentence or two before reading the first two or three paragraphs, unless a quick glance through convinces you that the text is going to present few- problems. In fact, the more difficult - linguistically, culturally. There are plenty of words, like modal particles, jargon-words or grammatically-bound words, which for good reasons you may decide nor to translate. But translate virtually by words first if they are 'technical', whether they are 'linguistic' (marigot), or cultural (sesterce"\ or referential 'sessile) and appear relatively context-free. Later, you have to contextualize them, and be prepared to back-track if you have opted for the wrong technical meaning.

1. Service translation, i.e. translation from one's language of habitual use into another language. The term is not widely used, but as the practice is necessary in most countries, a term is required.

2. Plain prose translation, The prose translation of poems and poetic drama initiated by E. V. Rieu for Penguin Books. Usually stanzas become paragraphs, prose punctuation is introduced, original metaphors and SI. culture retained, whilst no sound-effects are reproduced. The reader can appreciate the sense of the work without experiencing equivalent effect. Plain prose translations arc often published in parallel with their originals, to which, altera 'careful word-for-word comparison, they provide ready and full access.

3. Information translation. This conveys all the information in a non-hierary text, somerimes rearranged in a more logical form, sometimes partially summarised. and not in the form of a paraphrase.

4. Cognitive translation. This reproduces the information in a SL re a converting the SL grammar to its normal TL transpositions, normally reducing any figurative to literal language. I do not know to what extent this is mainly a theoretical or a useful concept, bur as a pre-translation procedure it is appropriate in a difficult, complicated stretch of text. A pragmatic component added to produce a semantic or a communicative translation.

5. Academic translation. This type of translation, practised in some British uni-versities, reduces an original SL text to an ‘elegant' idiomatic educated TL version which follows a non-existent; literary register It irons out the expressiveness of a writer with modish colloquialisms. The archetype ot this tradition. which is still alive at Oxbridge ''the important thing is to get the flavour of the original"', was R. L. Graeme Ritchie, evidently a brilliant teacher and translator, who was outstandingly more accurate than his imitators. I quote tiny scraps of Ritchie's weaknesses: La Noire-Dame avanca - 'The Notre-Dame worked her way in'; La plme hromlla les objets - The rain obscured everything1; Cette vie $e surpassera par le martyre t et le martyre ne tardera plus -That life was to Transcend itself through martyrdom and now martyrdom was not to be long in coming.

These last two concepts are mine, and only practice can show whether they will be useful as terms of reference in translation.