What is Semantic Development

Diposting oleh Agung Sejuta Januari 07, 2017 Posting Komentar
Words are produced from the age of about 1 year. New words are added slowly in the first year, so that by the age of 18–24 months the child has a vocabulary of about 50 words. Nelson (1973) examined the first 10 words produced by children and found that the categories most commonly referred to were important person names, animals, food, and toys. Greenfield and Smith (1976) found that early words may refer to many different roles, not just objects, and further proposed that the first utterances may always name roles. Clark and Clark (1977) argued that, in the very earliest stages of development, the child must start with two assumptions about the purpose of language: language is for communication, and language makes sense in context. 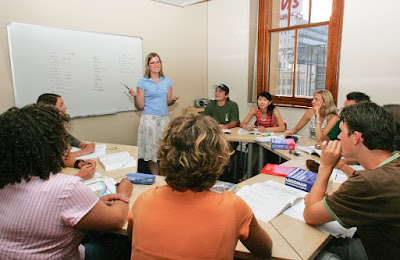 The emergence of early words

Linguistic development must follow cognitive development. The first words emerge out of situations where an exemplar of the category referred to by the word is present in the view of parent and child ostensive model of learning the first words (Quine, 1960). Ostensive means pointing—this conveys the idea of acquiring simple words by a parent pointing at a dog and saying “dog”, and the child then simply attaching the name to the object. The problem is simply that the child does not know which attribute of input is being labelled. This is often called the mapping problem.

Constraints on learning names for things

The developing child makes use of a number of lexical principles to help to establish the meaning of a new word (Golinkoff, Hirsh-Pasek, Bailey, & Wenger, 1992; Golinkoff, Mervis, & Hirsh-Pasek, 1994). The idea of lexical principles as general constraints on how children attach names to objects and their properties is an important one. Four main constraints have been proposed. First, the cognitive system may be constrained so that it tends to treat ostensive definitions as labels for whole objects. The taxonomic constraint is that a word refers to a category of similar things. A third possible constraint is mutual exclusivity assumption, whereby each object can only have one label (Markman & Wachtel, 1988): that is, (unilingual) children do not usually like more than one name for things. Fourth, as children acquire words, new strategies become available.

Other solutions to the mapping problem

First, there might be an innate basis to the hypotheses children make (Fodor, 1981). Joint attention between adult and infant is an important factor in early word learning. The problem of labelling objects would be greatly simplified if the adult and child establish through any available communicative means that the discourse is focusing on a particular dimension of an object. Taxonomic hierarchies begin to develop only after the constraint  biasing  children  to  acquire  basic-level  terms  weakens. Finally, there are syntactic cues to word meaning. Brown (1958) first proposed that children may use part-of-speech as a cue to meaning. The general capacity to use syntax to infer meaning is called syntactic bootstrapping (Gleitman, 1990; Landau & Gleitman, 1985), after the idea of trying to lift yourself up by your bootstraps.

Evaluation of work on how children acquire early names

Approaches that make use of constraints on how children relate words to the world have some problems. First, we are still faced with the problem of where these constraints themselves come from. Second, they are biases rather than constraints, as children sometimes go against them (Nelson, 1988, 1990). The constraints only appear to come into operation around 18 months, which is difficult to explain if they are indeed innate or a component of the language acquisition device. Third, whereas it is relatively easy to think of constraints that apply to concrete objects and substances, it is less easy to do so for abstract objects and actions.

Errors in the early representation of meaning

One useful way of finding out how children acquire meaning is to examine the errors children make. Children’s early meanings overlap with adult meanings in four ways: the early meaning might be exactly the same as the adult meaning; it might overlap but go beyond it; it might be too restricted; or there might be no overlap at all.

Over-extensions are when a child uses a word in a broader way than the adult usage. Under-extensions occur when words are used more specifically than their meaning—such as using the word “round” to refer only to balls.

Theoretical accounts of over- and under-extensions

The contrastive  hypothesis  is  a  pragmatic  principle  that  simply  says  that  different  words  have  different meanings. It is very similar to the lexical constraint of mutual exclusivity.

one principle is operating in semantic development. On the one hand, children have to learn appropriate contrasts between words, but they must not learn inappropriate or too many contrasts. As this is just the sort of domain where the learning of regularities and the relation between many complex inputs and outputs is important, we might expect connectionism to make a useful contribution here.

The later development of meaning

Later semantic development sees much interplay between lexical and syntactic factors. Quite often contextual cues are strong enough for the child to get the gist of an utterance without perhaps being able to understand the details. even when a child starts producing a word or structure, it might not be used in the same way as an adult would use it.

Referensi
Harley, Trevor A. (2001). The Psychology of Language From Data to Theory. USA and Canada: Psychology Press Ltd